The maps from the South Coast Sea Level Rise Vulnerability Assessment show what places along the South Coast between Miramontes Point near Half Moon Bay to the southern county line will most likely be affected by flooding and erosion with sea level rise amounts of 0 feet, 0.8 feet (0.25 meters), 1.6 feet (0.5 meters) and 4.9 feet (1.5 meters). Scroll down for map links. 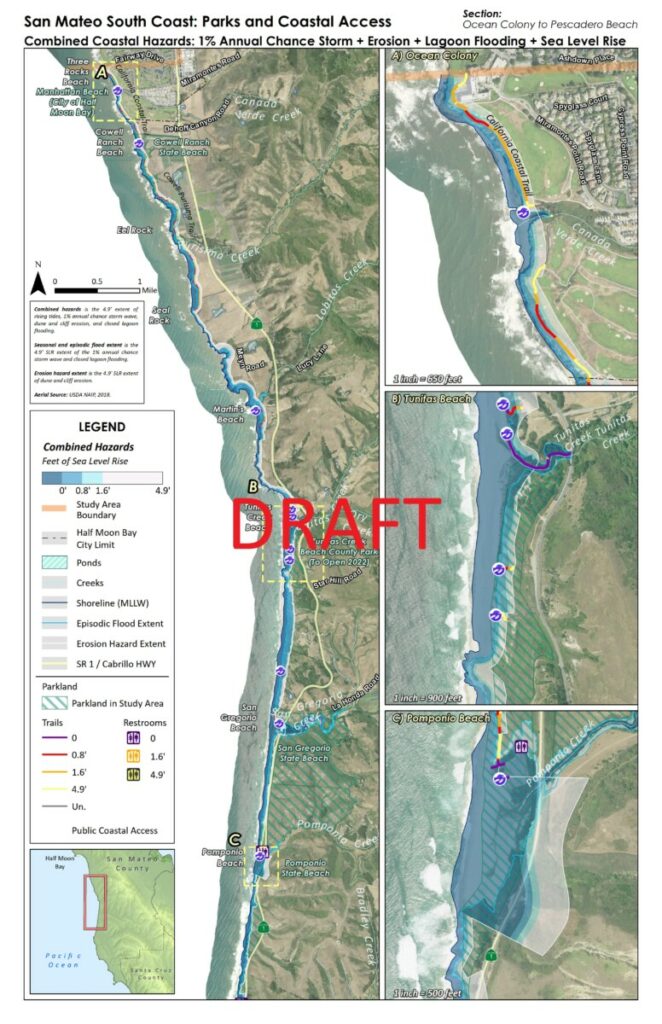 Maps are organized by the following categories:

How to read the maps:

Land Use and Structures (Houses, buildings, and privately and publicly owned land)
The purple, red, orange, and yellow features represent houses and buildings that will be affected by erosion and flooding at different levels of sea level rise.

Agriculture (Land used for agriculture)
The orange, yellow, and green areas show agricultural land that will be affected by erosion and flooding by 4.9 feet of sea level rise.

Transportation and Parking (Public roads and parking lots)
The purple, red, orange, and yellow features represent roads, bridges, and parking lots that will be affected by erosion and flooding at different levels of sea level rise.

Parks, Recreation, and Coastal Access (Beaches, trails, and parks)
The purple, red, orange, and yellow features represent trails and restrooms that will be affected by erosion and flooding at different levels of sea level rise.

The vulnerability assessment includes coastal risks that might affect the following sectors: Land use and Structures, Agriculture, Transportation and Parking, Parks, Recreation, and Coastal Access.

Below are a list of the coastal hazards evaluated and mapped; the sea level rise analysis uses CoSMoS data and the erosion analysis is based on data from the Pacific Institute:

The analysis focused on the following sea level rise and temporal range values:

Each sector map illustrates at what sea level rise elevation various infrastructure and resources become exposed to coastal hazards. The draft maps show results of detailed spatial analysis that intersect the projected extents of existing and future coastal hazards with locations of the assets, resources, and infrastructures. Exposure of various components are color-coded based on the elevation of sea level rise that first leads to potential damages. 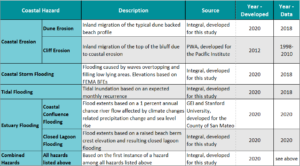 The mapped representation of existing and future coastal hazards is a combination of the furthest spatial extent all of the coastal hazards considered. The combined coastal hazard area is based on the best available scientific projections of coastal hazards at four sea level rise intervals and is represented on a scale from dark (delft blue) to light (snow white).

Each hazard extent represents the projected impacts caused by an extreme 1% annual chance type event (a 100-year storm event). A 1% annual chance event may happen in any year, however, the full hazard extents mapped in the combined hazard layer for each sea level rise scenario is highly unlikely to occur everywhere, as this represents the potential for extreme events across multiple areas, different physical processes, varying shoreline orientations, changing wave directions, and other local geomorphic factors. All of these projected hazard extents assume that no adaptation has been implemented – in other words, a worst-case scenario if nothing is done to plan for sea level rise in the future. 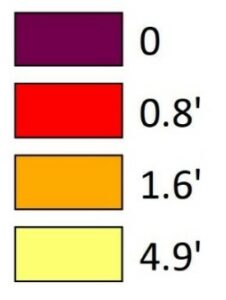 For each sector, the combined hazards are intersected with the various locational data to identify when the first instance of exposure occurs. All potentially affected features and assets are coded using a color scheme identifying if they are potentially exposed now, or at some point in the future, ranging from purple, red, orange, to yellow. Each color-coded feature corresponds to the sea level rise elevation that intersects each particular feature.

The maps and associated analyses are intended as planning tools to illustrate the potential exposure to existing infrastructure, land uses, and other resources to a variety of future sea level rise and coastal hazard scenarios. The assessment has been conducted on a regional scale, and the level of precision should serve as a screening tool for more detailed site-specific analysis. This Report is advisory and not a regulatory or legal standard of review for actions that the County of San Mateo or the California Coastal Commission may take. There are inherent uncertainties associated with modeling and projecting future hazards and their potential impacts.

These maps are based on model outputs and cannot account for all of the complex and dynamic ocean, terrestrial, and anthropogenic processes or account for future adaptation approaches such as shoreline protection upgrades. In addition, these maps do not include projected flooding from riverine rainfall-runoff events or flooding precipitated by land use change or other factors. Flooding due to sea level rise and the various coastal hazards is possible in areas outside of those projected, and even the best projections cannot guarantee the safety of an individual or structure. The contributors and sponsors of this product do not assume liability for any injury, death, property damage, or other effects of flooding. Although every effort was made to review all resource sector and infrastructure data received from other sources, neither the County of San Mateo nor its consultant, Integral Consulting Inc., can verify the completeness of all spatial data. For this reason, we do not accept responsibility for any errors, omissions, or positional inaccuracies. Users of the data displayed in the maps are strongly cautioned to verify all information.